I left Rome very early on day 3 to escape the heat. It was already creep[ing upwards to 80 degrees and I could not bear the thought of dragging two heavy bags and my back up down and up and back down and up  three flights of stairs: first two were to go under the train tracks and buy a ticket and the next two to go to the platform. So I called the Italian version of Uber (not Uber) and a real taxi showed up. The taxi driver a typical macho young 30s something. He was a very agressive driver. When we were backed up at a traffic light he would veer into oncoming traffic and cut infront the line waiting for the light. Maybe Italians expect it from taxi drivers.

It was a pleasant drive through various sundry roman ruins in the outskirts of Rome, see the pictures below. 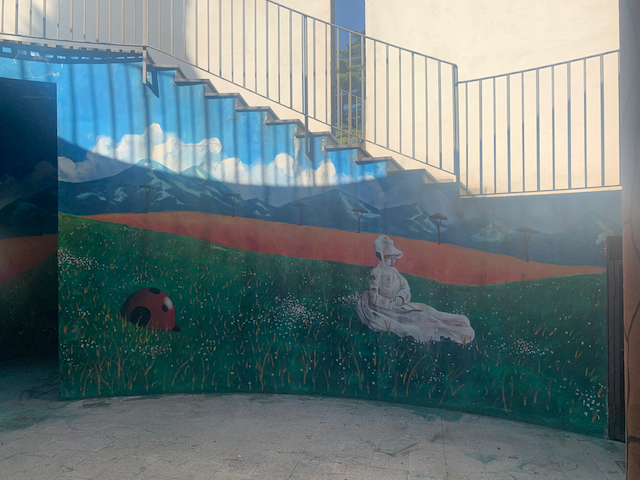 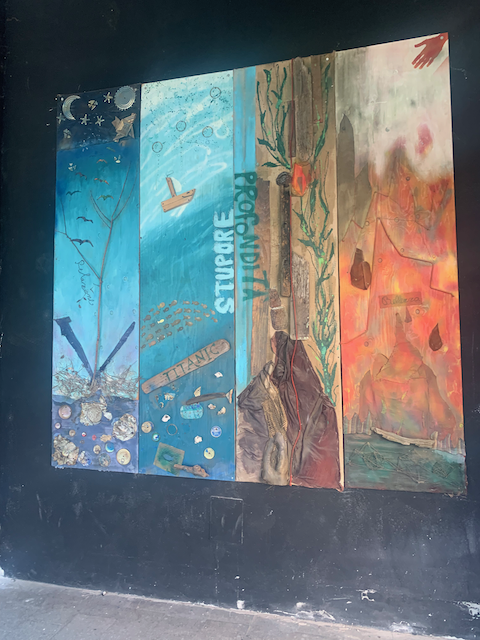 But when we we going to the Castel Gandolfo, we seemed on a non-descript state highway when suddenly up we went and I was not prepared for what I was about to see. 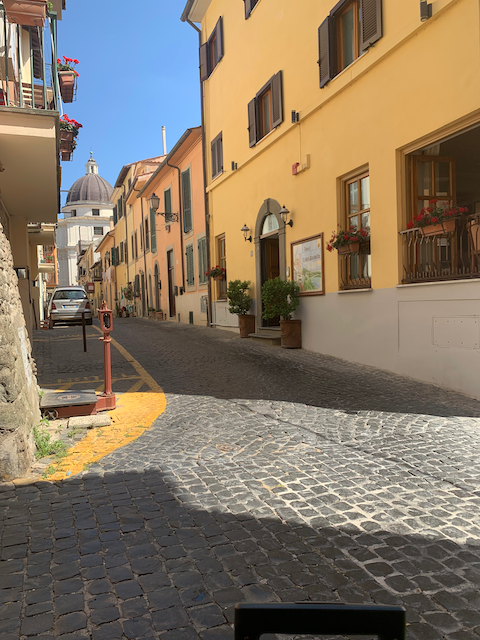 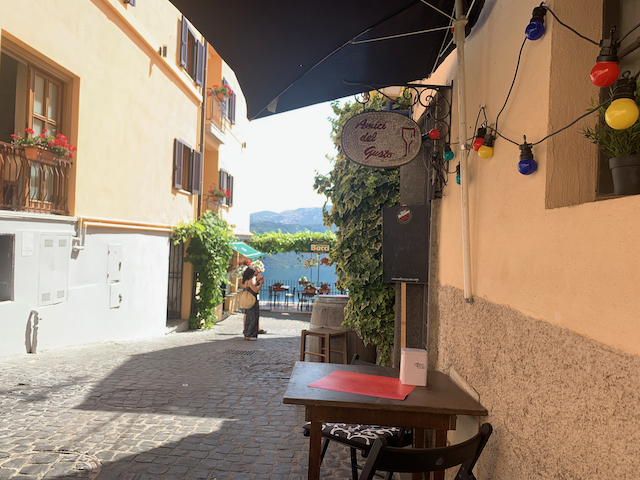 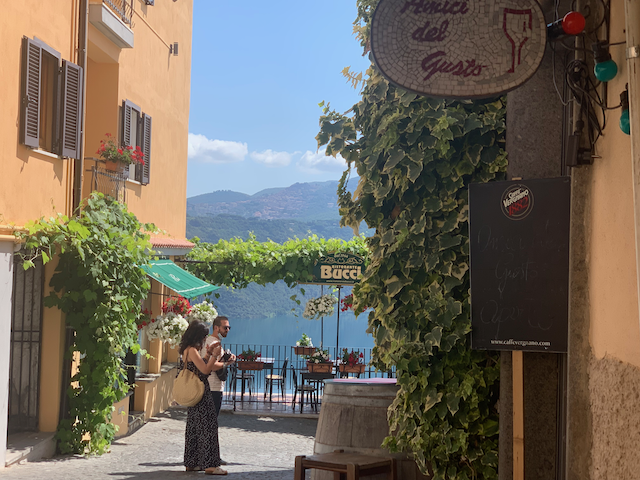 I got out of the car it was balmy weather: warm but pleasant—anti-rome weather. I drank in the scenery awaiting my host to take me to my lodgings for the next two nights. I immediately felt for the first time: this is a real possibility. The city had  the vibe of vacation. It would really be like living on vacation, which is the goal I am striving for, but I actually have a more humbler goal, I just want ‘La doce vita” of Italy.

After settling in my very nice AirBnB apartment 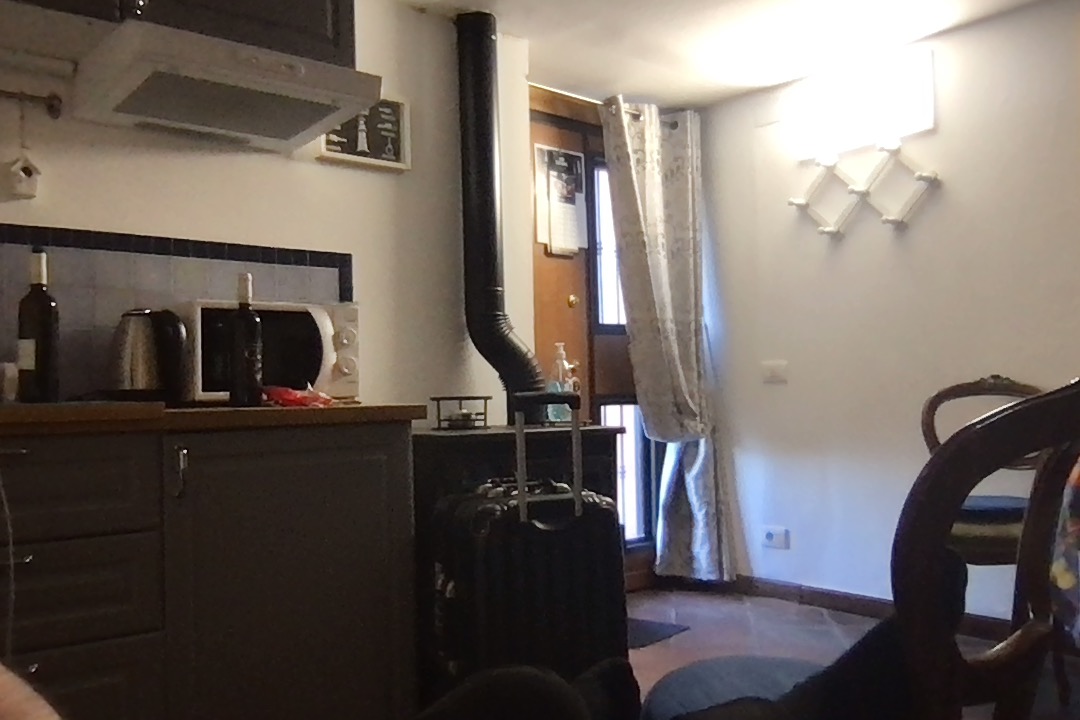 I decided on a lunch. And then a little walk around the area. 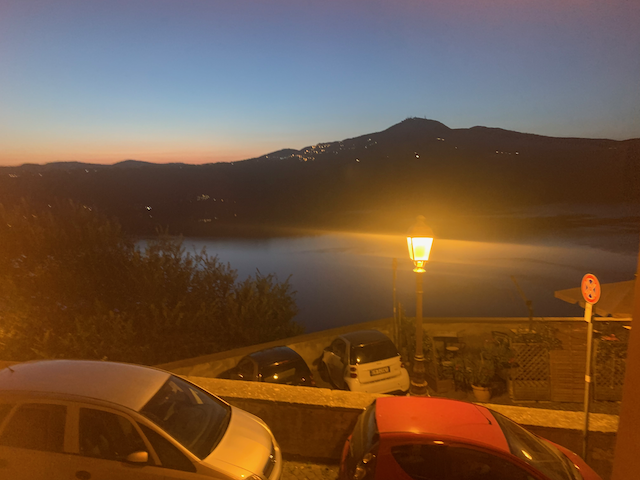 I want to thank my friend Stefano for helping me to avoid cultural embarrassment. I wondered why I never got a spoon for the pasta. I was going to ask for one when he informed me that “In Italy it is forbidden to use a spoon to eat pasta.” Always use the fork in the side of the plate, which is why pasta in never served in a plate without a lip. I think I may have know this many years ago, but when the age is in the wit is out.

Sunday morning, I took a walk through the village and went into the winding streets on a adventure  not knowing where i could possibly end up. 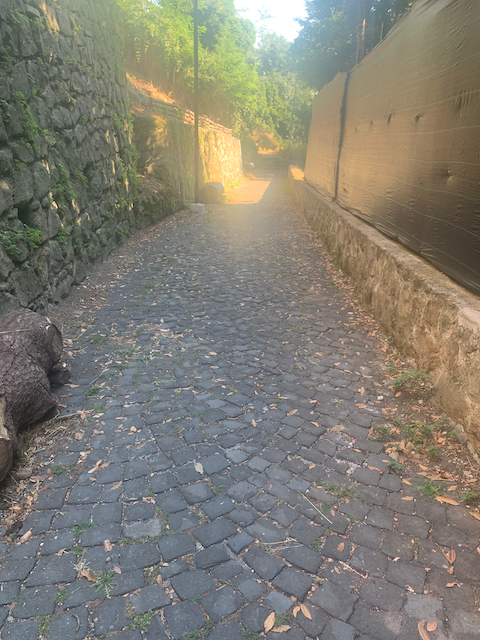 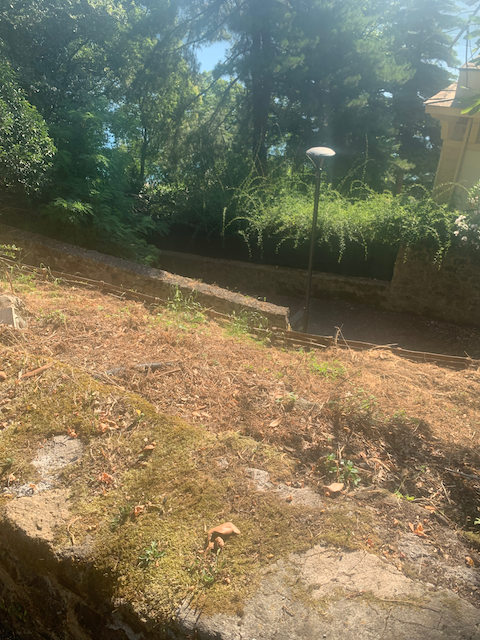 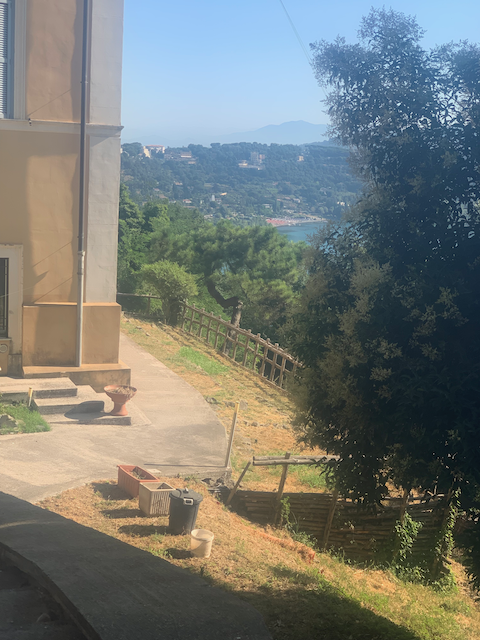 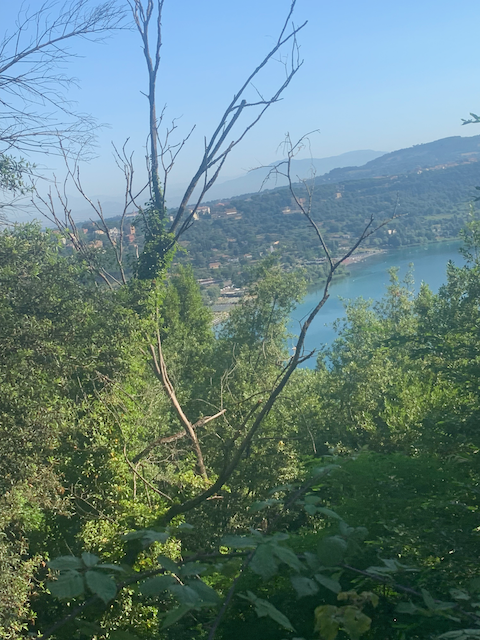 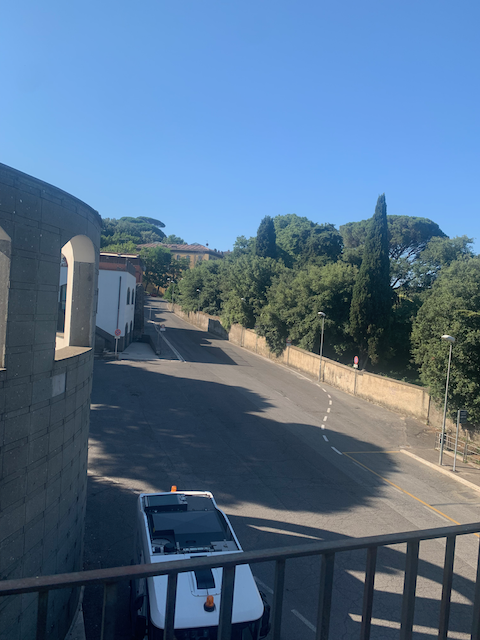 Until I ended up back where I started from!

Another lunch, again too much food so no dinner, but this was a special lunch. I finally ordered the roman Tornelli (Spaghetti) Carbonara.
First i had a cute mini appetizer in the form of mini Saltimbocca Romana (served on toothpicks). 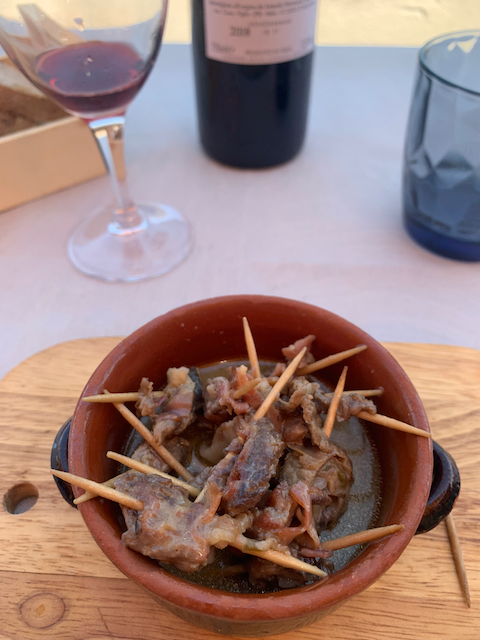 And I ordered what is now one of my favorite italian wines, Cesanese del Piglio 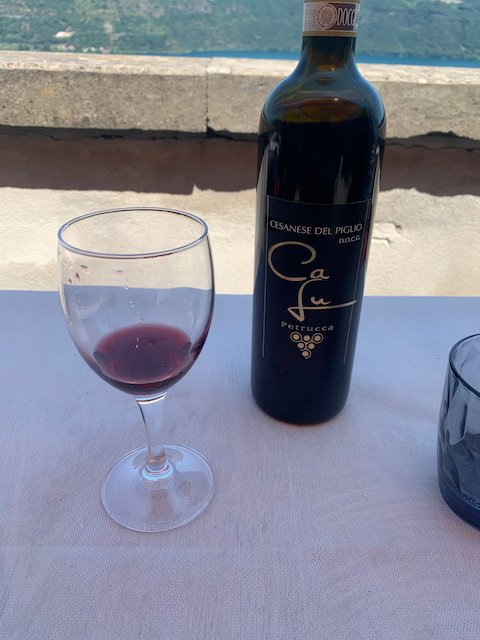 But the carbonara came and something was wrong:

What was wrong was three things: 1. The guanciale is here clearly bacon. 2. The consistency is much more creamier than any carbonara I have had before. 3. The color is suspiciously yellow. Even allowing for extra egg yolks. I was able to actually solve this mystery myself: this was not Carbonara, this was in fact Cacio e Pepe (another famous roman dish) to which bacon and egg yolk had been added. I felt BETRAYED! I know this is wrong because I saw Carbonara at the Roman Trattoria and it looked nothing like this and the sauce was barely hugging its pasta.

Even the great view could not redeem this culinary deceit. 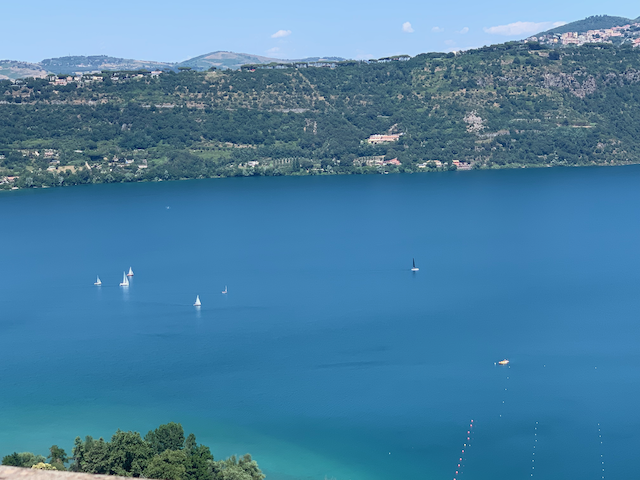 And a redemptive moment for the ugly Americans, some boorish people came in late demanding service right before closing. But they were not Americans they were Danish! 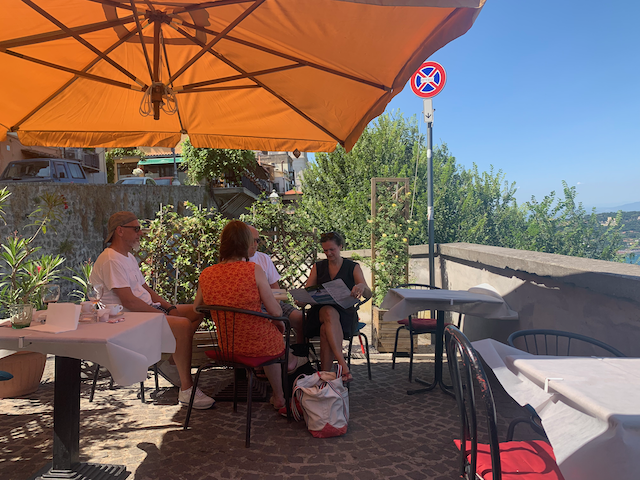 They were delightfully rude and oblivious.

The Castelli Romani are delightful and i loved being here (bad meal notwithstanding) and I can see how other villages (Gottaferra and Frascati for example) have more to offer that Castel Gondolfo. But the point was sill to be near Rome for things like the opera or other cultural events. And i am afraid I don’t find this a compelling experience. I am off to Genoa and try my fortunes there!