It is nothing short of  miracle I am here to write this entry today, more on that later.

24 hours ago I was in San Francisco. For 240 hours I was obsessing about the ever changing requirements to enter Italy as an American citizen. Proof of vaccination was unclear. Types and numbers of vaccines was unclear. Special documentation which had to be downloaded form thew internet changed by the week. I kept  spreadsheet and a tabbed folder of all the different permutations of documentation the Italian government was subjecting us to.

So imagine my surprise when I entered Italy and no one asked for anything. They barely wanted to see my passport. I also entered with 12 bottles of American wine without so much as a glance from Italian customs: welcome to the sweet life.

I took the train from the airport to Rome’s central station. Once there I realized I needed a bus ticket and was sure the bus would not sell them. I walked up to a news stand and recklessly said “Ho bisgono di uno bigletto per le metrebus.” Her acid reply was, “that will be a euro fifty.” I was “Was I that bad?” and she ignored me.

I boarded the 64 bus to St, Pietro Stefano station where my landlady was waiting for me. No one got up for me and i said to no one, in bad italian, “It’s okay, I am old but I am strong” “Va bene, sono vecchio ma forte.” None of the multicultural nuns, elderly italians or the millennial foreigners (I’ll tell you how I knew shortly) took any note. (Is anyone still reading this?)

The bus took off and i was shocked how my luggaage lunged in every direction with every start and stop. The first time almost knocked over an elderly southest asian nun.

The bus first went by a busy tourist street which has an improvised series of three tents. The first tent said “Covid Test” the second two said “vaccinazione covid” The ride was amazing in the way it just banally went by amazing sites.

Then, what was internationally recognized happened, when a team of four fare controllers got on board. One immediately stood by the ticket stamping machine and prevented three people from stamping their unstamped tickets. They grilled every young passenger and passed out hefty fines to all of them, though he offered a huge reduction if they would pay immediately. After they left. I asked the driver, “they didn’t even ask me.”

“You have a ticket?’

The ticket was only 1.50 none of the fined passengers looked very poor—though they are now.

Took a bus (did I mention the 3 heavy bags) thinking this will never work and yet it all did.

My AirBNB host met me at the airport, a charming women in her 40s. She was laid off by Alitalia during covid and makes her living renting out her house on a mountain that overlooks St. Peter’s.

The room was not ready so she directed me to a caffe in this surprisingly rundown part of town by the St. Pietro Train Station. I realized Ieft my money in her apartment. So I went for a short walk to look fora ATM. After all it was cloudy and breezy—balmy even. So I found an ATM 45 minutes of walking later. Took out money at the current exchange rate and now foreign bank fees (thank you Capital One 360).

I passed this marvelous panini stand and ordered a delicious sandwich and a bottle of mineral water. I was a little surprised by 2 things. One: there was more than one very young women looking at me and secondly I was shaking and sweating and suddenly feeling extremely exhausted. I could barely lift the glass of water to my lips without shaking. I realized I was having some minor heat stroke. The young ladies quickly lost interest (which was just as well).

The sandwich and 3 bottles of mineral water were restorative.

However, by then the sun came out. Instead of 88 degrees it was 93—no shade between here and my new home.

Walking was exhausting and extremely painful. My head started pounding.

I lumbered into my 5th floor attic apartment. It was incredibly hot.  I crawled to the small air conditioner and it bleated out a little cool breeze. I lay in front of it and the 27 centimeters in front were enjoyably cool while the rest of me was hot.

I typed out an SOS to Esther: I need to talk to you know and then fell asleep.

I stood up and hit my head against eh wall and at once noticed how tiny the sloping ceiling was. Good thing neither Minne, Lyndon or Don were here as they couldn’t stand up in the place

Several hours later I facetimed with Esther, who was blissfully unaware of my SOS call (It was on whatsapp which she hadn’t checked). Bless her heart I started to feel much better. The airco reduced the 190 degree apartment to well under 187.

Minne called me too and we had a great talk and I started feeling better. I had this outstanding lunch, heat stroke aside. But I did gleefully tell Esther and Minne that Rome was ‘zonder paardon’ taken off the list.

Minne and I had such a nice conversation that I realized I had to hang up and leave for a reservation I had with a local slow foods roman restaurant.

I meandered to the Vecchio Osteria del Gelsino, on visa del Gesino. 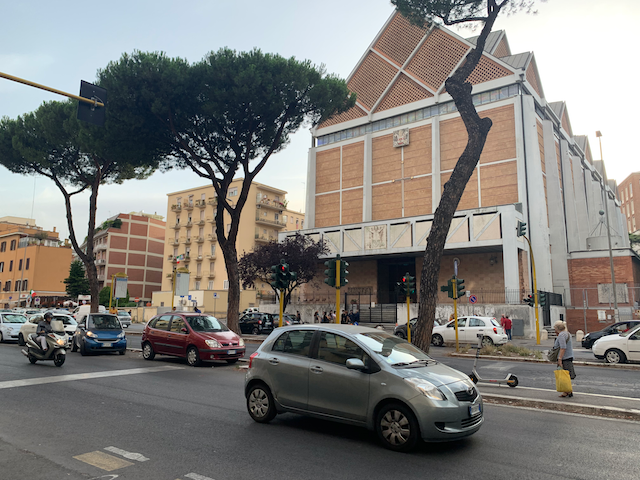 As bad as my Italian was in the trainstation I was almost adopted by one of the co-owners (Tiziana) who was waitressing the entire restaurant while the man sat and read the paper (and people wonder why women want to change gender?)

But as I sat down my life changed. Even trhough it was extremely hot in the restaurant,I had magically entered La Dolce Vita. The food was outstanding! Here are highlights of notes I had taken: 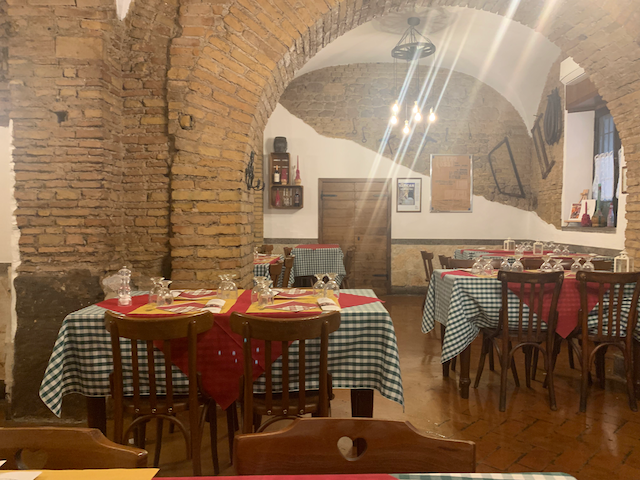 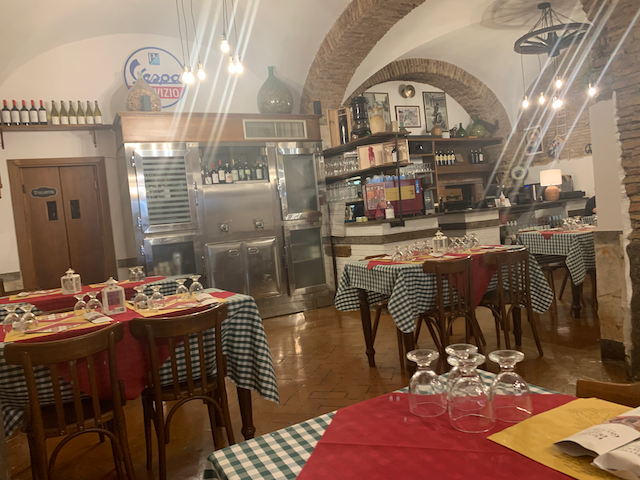 Bread is a country style pain levain brought in a paper bag, because of covid?

Lost my first bout in italian. Tried to order a local wine from Lazio. The waitress (co-owner with husband) insisted on giving me a half a liter of house wine for 4 euros. It tasted delicious. 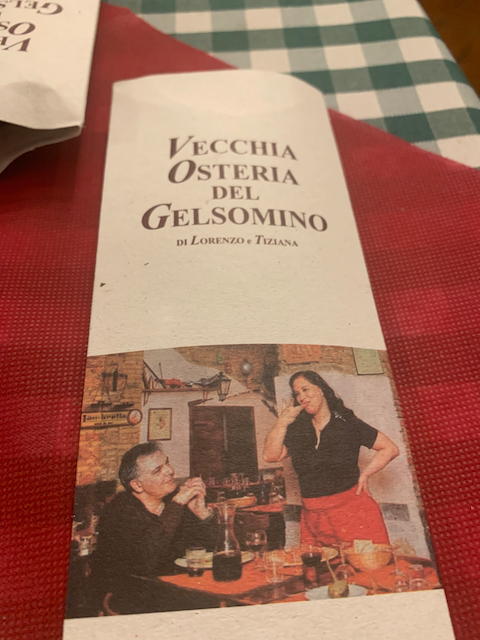 Bruschetta is just slices of tomato, basil, crushed parsely and olive oil on toasted bread but even the light tomatoes have full flavor no salt is added or needed. 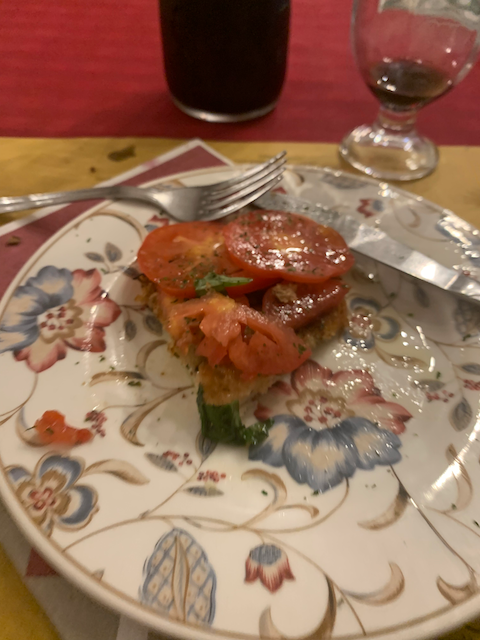 So I got the Piatto del giorno homemade pasta with tomatoes, (UPDATED, not scarmorza as earlier reported.) crescenza or strcciatella (like burratta) and anchovies. A buieatiful dish which when you tossed tiurned into a sublime treat for my overwrought tongue. 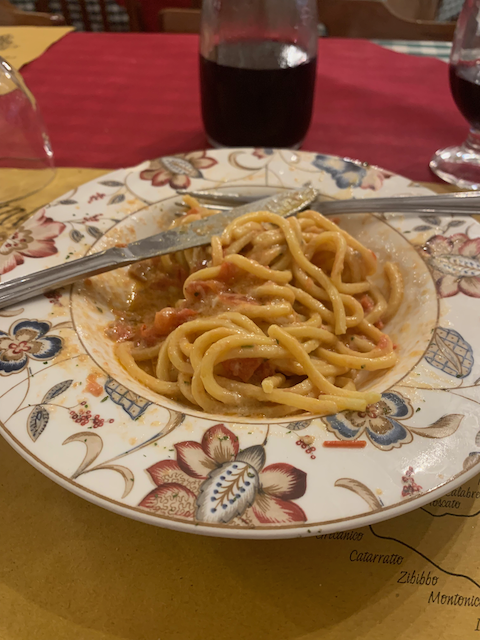 How can anyone eat anything after this? Sadly I had already ordered the meatballs ala romana.

820 pm: An Italian has come in and just ordered spaghetti carbonara—go figure.

I still have the Roman meatballs polpette

The meatballs are perfect. Cannot taste filling but it is there and adds tenderness without cheapening the overall texture and taset 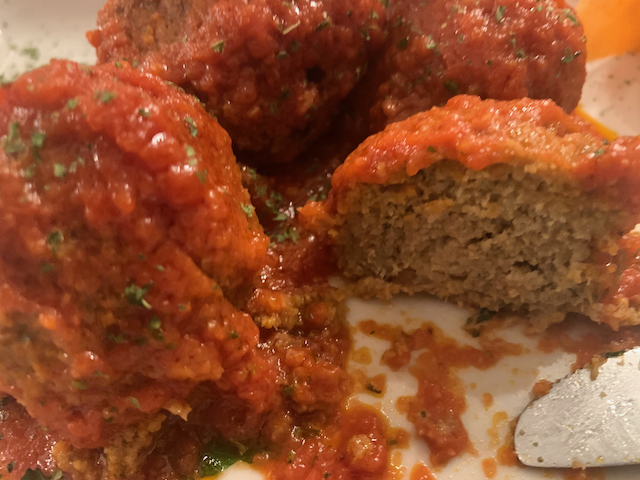 The carrot and the zucchini with mint shaped into a flower were just an garnish, though I learned from Morris to never let it go uneaten. And it was delicately delicious!

The carrot had fresh mint that exploded with flavor

20:20 An English couple comes in and the waitress asks me to recommend something for them, she was apparently quite taken with my ordering.

21:00 pm and the Italians come in droves

21:24: How am I getting some I ate too much even the caffe does not help

21:33 I went to the counter to pay the bill. The man got up and rang me up and told me the coffee was on the house. I wanted to cry. Happily i trudged home to full to walk. 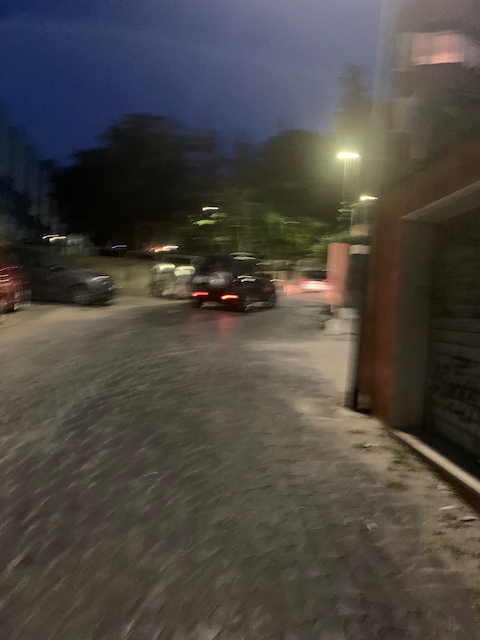 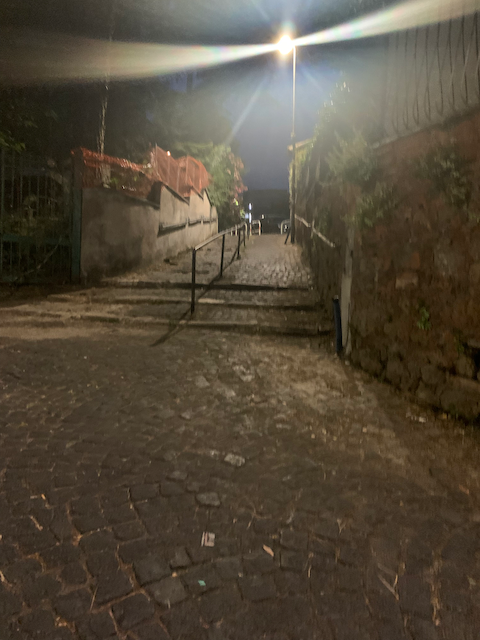